It's a Good Day When Everyone Gets to be Right

Miss Rowe: "Fahad, will you share your thinking on this problem with the class when we all come back together?"

Miss Rowe: "That's okay, I just want to hear what you think."

Fahad: "But what if I say something wrong?"

One activity I have started using to overcome this fear is called "Which One Doesn't Belong?". The idea for this activity is taken from the book with the same title by Christopher Danielson. You can find the book on Amazon here.

The great thing about this activity is that EVERYONE IS CORRECT! All 4 items in the picture could be the item that is wrong. Pick any of the items, there is a way to defend that it is the item that doesn't belong with the others. How great is that? Knowing that no matter which one you pick, you are right. BOOM! Your confidence skyrockets. Now you can work on being able to explain why. And the focus shifts from being right or wrong, to being able to communicate.

Here is a quick example: 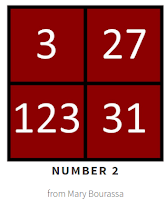 This is just a few of the many ways you could defend these numbers as the one that doesn't belong.

Want to know the best part? There is a website with TONS of examples for you to get started and get inspired. You can find it here. Once you get going, it's impossible to stop. I'm constantly finding ways to apply my content to this activity.

So how does this work?

1. Post the picture
2. Give students a few seconds of silent think time.
3. Have students go to the corner of the room that represents that number. I draw a quick map on the board that show the top right example would mean this corner of the room, etc.
4. Once they have chosen which one doesn't belong and walked to that corner, they talk as a group and pick their favorite justification.
5. Choose a volunteer to share out why the group thinks that that particular example doesn't belong.

So how could I make it harder?

To add another layer to this activity, challenge students to stay at the same corner no matter what and try to find a reason that number/example doesn't belong.

And there you have it. A worry free activity where all students get a chance to be right. That's a classroom win for you AND all students!