I have an obsession with card sorts. It's no secret. Ask anyone in my building, teachers and students alike. I love sorting cards. I think I love sorting cards more than I love Dutch Bros Iced Americanos with 2% milk. I even dream about card sorts. There is something about the repetition of sorting that helps students understand concepts SO MUCH MORE than just doing the problems on a worksheet. Before we dive into the language component (which you know is coming), let's just break down the mathematics involved in a card sort.

There are card sort activities and there are card matching activities. I am talking about a sort. Come back soon for ideas on card matching activities. Let's run down the basics. Students get a pile of cards, and they need to sort them into categories. Maybe you have decided before hand what the categories will be or maybe the students create the categories depending on where you are in the content. It seems so simple, but the pay off has been huge. Here are just a few ideas on card sorts I have used or seen used in my building:

1. Function or Not a Function (give students multiple representations of functions or just focus on a particular representation)
2. Linear or Not Linear (same thing with the multiple representations as above)
3. Triangle Congruence Conditions (given a picture of two congruent triangles, sort based on SSS, SAS, ASA, etc.)
4. Solving Equations Solutions Types (one solution, infinite solutions, no solutions)
5. Proportional Function or Not a Proportional Function
6. Negative Slope or Positive Slope
7. Rational or Irrational Numbers
8. Non Repeating or Repeating Decimals (given as a rational number)
9. Prime Numbers or Not Prime Numbers (could also do even and odd numbers for the littles)

The card sort itself is great. But I got to the point where I felt like we didn't have anything to show for our awesome thinking. Students just sorted the cards and then left for the day. There was no way for students to go back and have a resource to study from. There was no evidence of our thinking or oral language that had been used. So now we make sure to ALWAYS finish up our card sort with a writing activity. 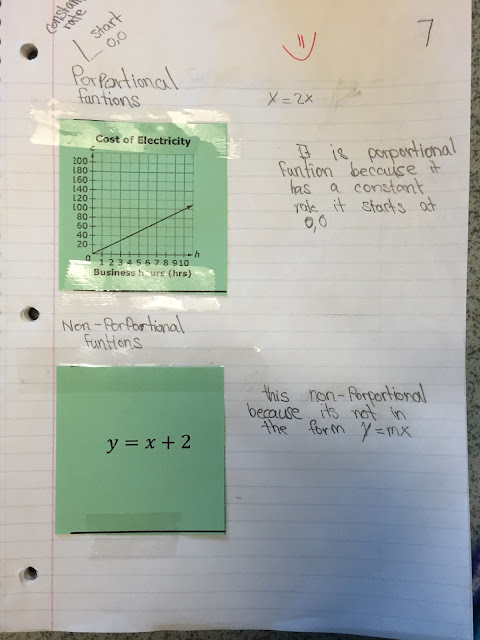 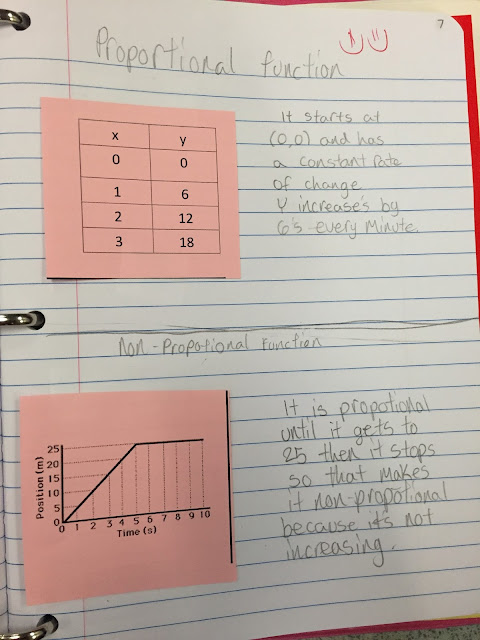 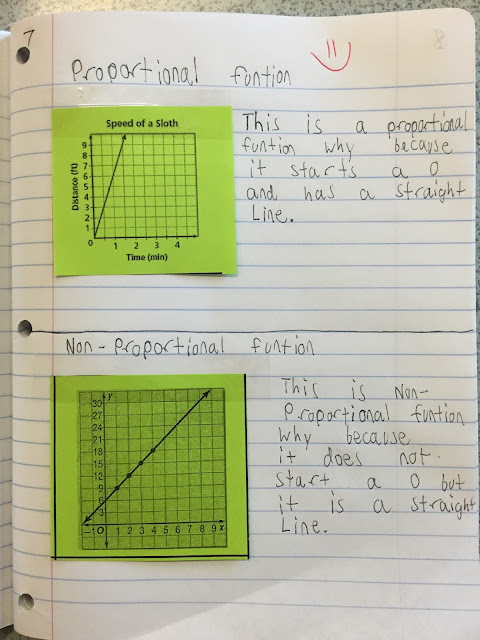 I just loved finishing the card sort with a writing activity. It really helped to bring the day full circle, and solidify the knowledge gained. For English Language Learners, I found that doing this entire activity has been crucial for connecting the oral with the written academic language needed to understand the concept. Each ELL student sorted around 30 cards, listened to others in their group repeat the same reasoning over and over again for proportional or not proportional, spoke to their group members at times when they felt they were ready to reiterate that reasoning, and then wrote down that reasoning in their notebook. The repetition happening here has been incredibly beneficial for all students, but especially ELLs.

What ideas do you have for mathematical content that would work well in a card sort?