And just like that, the first week of school is over. Don't blink, because in junior high the first week goes by quicker than you can say Pythagorean Theorem. This year's group of kids does not lack enthusiasm or personality. They are spunky, unafraid to speak out, and rather rambunctious during any transitional time. I like their zest for life, just have to learn how to channel some of this energy into mathematical productivity!

This year is much like the last five in regards to the diversity of the students in my classroom. We've got quite a handful of kids who have just recently found themselves in the United States, learning English, learning how to "do school", and learning how to socialize and make friends. I wanted to make sure that the first day of class would set the tone for the rest of the semester. What do I mean by "set the tone"? I wanted my students to know that in this class, we talk. Not just some kids, but rather all kids talk. In this class, we learn from others. In this class, we wonder. We listen. We argue. We think. We move around. We change seats, a lot. We ask questions. We get stuck. And most important of all, we persevere in problem solving.

Once I decided that this was "the tone", I had to figure out what sort of an activity would allow for all of these things to happen. Well, I don't know that ALL of them happened, but we got pretty close for Day 1. As students entered the class, they were handed a card that looked like one of the cards below. Up on the board students were prompted to solve their two step equation and find others in the class who had the same answer for x. Then, once they found their group, they needed to find a group of desks and sit together. When they were all together and sitting, they would get a prize (Hershey's Nuggets, because they are smart little nuggets). Easy enough right? 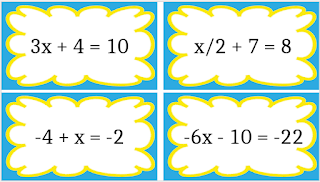 It was magical. Students immediately panicked. It had clearly been a long three months of NOT thinking about isolating a variable using inverse operations. Students started talking. Students started working together. Clusters of students started remembering different things and would swap nuggets of knowledge with other clusters. A few ELL students, who I knew would be somewhat overwhelmed, were approached by other students asking what their answer was. When they said they weren't sure yet, they were given help and assistance by their peers. Did their peers REALLY want to help them out of the goodness of their hearts? Maybe. I like to think so. But I also don't mind it if they were just helping other students to really help themselves find their group faster. Either way, they were talking and working together. It's the first step down this path of FULL inclusion for all students in my math class.

This activity took the full 30 ish minutes of class (Day 1 is a half day for the Boise School District). And do you want to know the best part? I didn't talk at all. The one doing the talking is the one doing the learning right?

What other mathematical concepts could you use this idea? I was thinking equivalent fractions, fractions/decimals/percents, multiple representations of linear functions (match same slope), etc. Have another idea? Comment below!
Posted by Meg Rowe at 2:26 PM

Email ThisBlogThis!Share to TwitterShare to FacebookShare to Pinterest
Labels: back to school, First week, set the tone